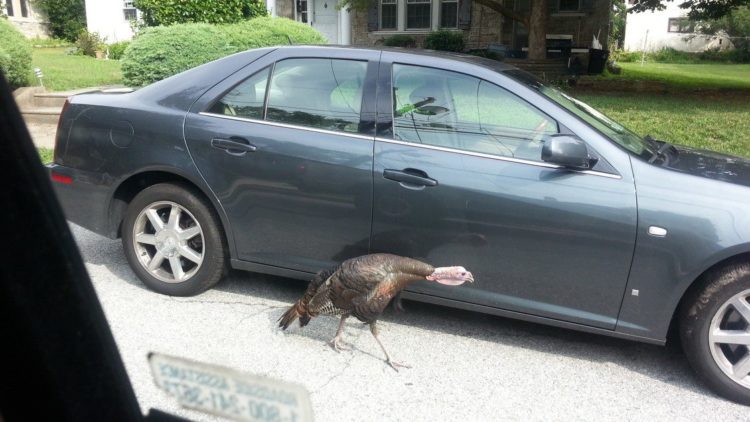 Wild Turkeys on the Loose

Most Lansdowne residents know.  He’s on the loose.  A wild turkey.  Make that a few wild turkeys.  Abandoned by their owner, these guys can be seen wobbling down the street, oblivious that Thanksgiving season is right around the corner. Animal control has been called several times, but rumor has it that the PSCA responds to these calls with laughter.

Pastor Robert Fontell recently spotted one and posted this picture on Facebook: 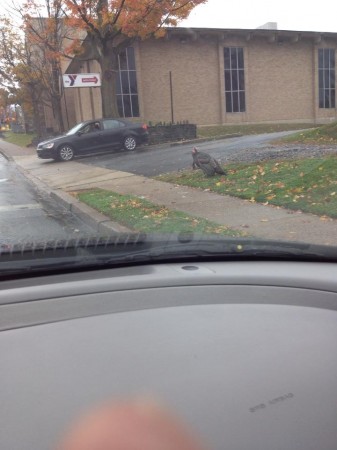 Can we say “drive by shooting”? With a camera?

My hubby, investigative reporter at heart, got the scoop on these birds:

The owner abandoned them after moving.  There were four turkeys but one was hit by a car on Lansdowne Avenue leaving the three that you now see.  They are wild & roaming Lansdowne township.  The bad news:  there have been recent sightings of coyotes in our area so their days may be limited.  I hear these coyotes are large so beware.  They have been known to attack small animals and people. 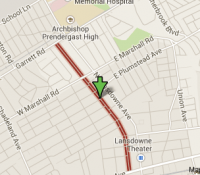 That’s what he posted on Facebook on the same thread with the above picture.

Quite an active thread!

Someone else chimed in, “The owner’s house is actually on Owen Avenue.  He lets them run loose.”

That’s when Veronica Icewater spoke up, promising to take action and get to the bottom of this nonsense.  She wrote:

Yes [these turkeys] were on Fox 29. I am not sure if the UD animal patrol will pick them up. The SPCA charges I believe, and there is no one to bill.  I have a meeting with some of the town council candidates tomorrow. I will ask who is in charge of turkey collections! Lol.

Here’s what she reported back:

As promised, I spoke with our State Rep Margo Davidson and members of the township council last evening.  She has gotten multiple calls and says that the UD animal patrol is responsible for picking them up.  She says people have to call at the time of the sightings.  She said they don’t move that fast so if they call when they see them they would be able to come out. I tried to call SPCA for their response, but they wanted me to press 1 then Press 5, etc, and gave me a recording.  I don’t believe SPCA will pick them up, nor does the council.

These turkeys are even stars on YouTube.  Residents have even named one of the turkeys, “Tom.”

Here’s a playlist of several videos of the turkeys I found on YouTube:

Coyotes on the Prowl

But it’s not just turkeys in Lansdowne, it’s coyotes, too!

My husband spoke with several neighbors in Lansdowne who gave eye-witness accounts about the coyotes.

The consensus is that they are “big and grey.”

One neighbor says he went to take out the trash.  And there one stood.  He said the big coyote commenced in a “stand off” with him.  The neighbor slowly stepped backwards back into his home and closed the door, and the big and grey animal ran off.  Coyotes are known to travel in packs, but so far the sightings are of just one coyote.

There are rumors of coyote spottings in nearby townships, too.

And just when you thought it can’t get any stranger, yesterday while my husband was driving home, he saw a hawk.  While that’s not too unusual, this hawk swooped down three car lengths ahead of him.  Then snatched up a squirrel.  If that wasn’t enough excitement, the hawk began to rip apart and eat his meal on the spot.

We do not believe our neighbor’s tiny dog is safe.  Repeat:  not safe.

For anyone with tiny dogs, keep a close eye on them!

One theory is that the wild turkeys have attracted hawks to our area.

With all the good:  some lovely neighborhoods, Lansdowne Farmer’s Market, Harvest Foods, Annual 5K Walk/Run, churches, etc, etc, there’s been some scary stuff in our ten years of living here.  Next to picking up our toddler from the Lansdowne Police station because his babysitter and longtime church daycare worker was arrested for shoplifting while in her care & initially refused to tell us where she or our son was, the wildlife of Lansdowne, particularly the coyotes, has gotta be the third scariest thing we’ve experienced next to the rising crime rate.

We don’t live in Alaska or the wilderness.  This is Lansdowne, a small township right outside of Philly, the fifth largest metropolis in the nation.  This township is about five to ten minutes from 69th Street station by car.  So no, you don’t expect wild turkeys and attack coyotes on the loose!

But you gotta admit, this sure does make our town that much more interesting.

And shucks, it’s bonding our community even.  Makes for easy small talk in the coffee shop.  “Hey, have you seen the turkeys yet?”  I just hope these guys survive the coyotes, and Thanksgiving for that matter!

What will we see next?