Worship CD, “I Worship You” by Nicole Danielle 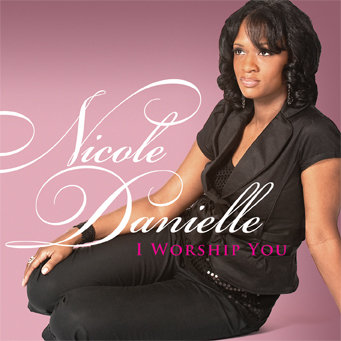 You learned about Nykki Efunnuga’s counseling practice in part one of my interview with her.  Now it’s time to learn more about her singing ministry and worship CD. 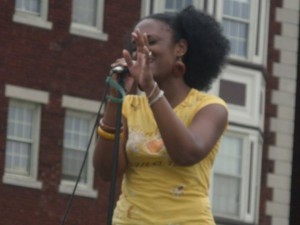 June:  How long have you been singing?

N:   I have been singing since I was a little girl, although I have not had any formal training. When I was really young, I sang on a few choirs both at my grandmother’s church and at the churches of some close friends.

Although I sang a lot and enjoyed it, I didn’t really “know” I could sing. It was not until I noticed others’ reactions to my singing that I realized I had a nice voice.  My grandmother recognized the talent early on and encouraged my mother to allow me to develop the gift.  I also had an aunt that sang beautifully who taught me basic breathing techniques.

After I became a Christian at age 23, I joined my church’s young adult choir. It was at this time that my passion for singing was re-ignited. Yet, this time it had a purpose to it. I was so happy to be saved and grateful for God’s love and grace towards me that I just couldn’t keep silent! :-)

I was content to be wherever God wanted me to be musically, but I also wanted to grow as a vocalist. I’d pray for the Lord to open more doors if that was His will. And he did just that. The more I sang, the more the gift has been developed.

J.  When did you began writing your own songs?  In particular for your CD that was released in 2009?

N:  At some point about 5 years ago it was like God turned on a switch or something. I just started hearing things musically that I simply did not hear before and He also just started pouring songs into my heart.

I was never a song or poem writer before, but I would sit in quiet time with God and would come away with a song.

I mean songs started pouring out of me like crazy! I would write an entire song in like 10 minutes. I would awake in the middle of the night with a song and a melody playing in my head! It was amazing…and I knew it was God doing a work. I just kept the songs and waited for an opportunity to use them.

N:  I was on my church’s worship team and a guy named Dave Stevens of Sanctifly Music Group, who was both a professional musician and a producer, joined the team. After several months, he told me he was looking for singers who might want to record in his new studio.  My husband encouraged me to pray and see if the Lord was trying to open another door of opportunity. We did just that, assessed our finances to see if we could fund the project, and met with the producer. The very next day after that meeting, my father passed away. He was my first earthly hero and music mentor. His death inspired me to make the most of every opportunity, so I stepped out in faith and agreed to do the album.

N:  It was such a fun process completing the album!! The first time I heard the chorus to one of my songs played back, I teared up right there in the booth! I was really overwhelmed at how far God had brought me and was just amazed by His grace on my life. It took about 10 months to complete. I would sometimes get really discouraged for no reason, but my husband, Dave, and a close friend would encourage me to continue. I became pregnant with my daughter during the process, so I became really motivated to complete it before my belly grew too large and singing became more difficult. I recorded the last song with a huge belly!

J:  Are you still active musically?

N:  Currently, I still sing and lead worship at my church and am collaborating with some other team members on some original music. I also collaborate both vocally and lyrically with other artists as opportunity arises.

Specifically, I have worked with tb and KinDeezil of Eternal Life Music, a Christian rap group with an awesome ministry.  We are currently collaborating on some new music for their upcoming CD.  Additionally, I am also working with Donald Robinson of S.O.W. Productions, a veteran musician and producer, writing lyrics for other artists.

When God presents opportunities for me to serve Him musically, I am more than eager to lay my gifts back at His feet.

J:  What is the name of the CD and where can people purchase a copy?

N:  The CD is entitled “I Worship You” and is available for download on iTunes and Amazon as well as CD Baby and Napster, among various other online outlets. They may also purchase a hard copy by contacting me at heiressoflife@gmail.com. Samples of songs are available on the aforementioned media outlets as well as at www.myspace.com/heiressoflife. You can also find and “like” my artist page on Facebook.  People can also contact me via email at  or via phone at 215.833.1014.

J:  Are you planning any other CDs?

N:  I am planning to complete another solo CD within the next couple of years, depending on how God is leading regarding my family and other ministries. We are pretty busy! :-)

I am currently about to begin working on an EP of duets with an amazing vocalist, Amanda Davis.  We recently formed a group called Beautifully Broken.

Our vision so far is to write and minister contemporary Christian music for free.  Prayerfully, the EP will debut some time later in 2012.

Editor’s Note:  The CD is entitled “I Worship You” and is available for download on iTunes and Amazon as well as CD Baby and Napster, among various other online outlets.   You may also purchase a hard copy by contacting  Nykki at heiressoflife@gmail.com. Samples of songs are available on the aforementioned media outlets as well as at www.myspace.com/heiressoflife. You can also find and “like” her Facebook artist page.

Be sure to check out Part 1 of Nykki’s interview, where she discusses her counseling practice, Heart Mission Therapy Services, LLC.