Why I Hate Religion But Love Jesus (Video) 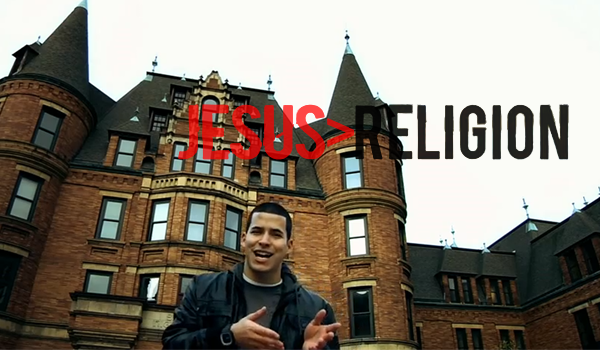 The video, “Why I Hate Religion, But Love Jesus,” went viral shortly after it was uploaded to YouTube by Jefferson Bethke this month.  And I recently read some interesting critiques about it.

What do I think personally?  Well, I think some people “critiquing” the video are getting caught up on the poet’s use of the word “religion.”  However, in the description of the video the poet clarifies that he’s speaking about “false” religion, not religion in general.  And listening to the entire poem in context (and not focusing on the title), it seems obvious to me that that when he says religion he means “being religious” (like the Pharisees) vs. “having a personal relationship with Jesus Christ, one that is real and authenticate.”  And to that end, he makes a great point.  In fact, his poem largely sums up my position and feelings on “being religious.”  I do not consider myself religious (I hate that label).  But on the flip side, I don’t necessarily like the label “Christian” either, even though I am a follower of Christ.  Why?  Because there’s so many professing Christians out there (often who come on TV) who give that label such a bad rap and do not believe anything remotely close to what I believe.  (For example, the gentleman who says he knows the exact date the world is ending, says he’s a Christian, yet the Bible clearly says no man knows the hour.  Just to give you “one” example of many.)   However, I do consider myself to have a personal relationship with Jesus Christ.  But to me, that is what his poem is all about.   The poet says as much in the video description on his YouTube page (reprinted below).  In summary, Christians who are “religious” like the Pharisees (aka “Christian Legalists“) and not really about what Jesus Himself was/is all about.  And that distinction is a huge one.

Here’s a few of the critiques I found on the Religion vs. Jesus video:

In the words of the poet in the video,

“[This is] a poem I wrote to highlight the difference between Jesus and false religion. In the scriptures Jesus received the most opposition from the most religious people of his day. At it’s core Jesus’ gospel and the good news of the Cross is in pure opposition to self-righteousness/self-justification. Religion is man centered, Jesus is God-centered. This poem highlights my journey to discover this truth. Religion either ends in pride or despair. Pride because you make a list and can do it and act better than everyone, or despair because you can’t do your own list of rules and feel “not good enough” for God. With Jesus though you have humble confident joy because He represents you, you don’t represent yourself and His sacrifice is perfect putting us in perfect standing with God!”

And here’s the lyrics:

What if I told you, Jesus came to abolish religion?

What if I told you getting you to vote republican, really wasn’t his mission?

And just because you call some people blind, doesn’t automatically give you vision.

If religion is so great, why has it started so many wars?

Why does it build huge churches, but fails to feed the poor?

Religion preaches grace, but another thing they practice,

Tend to ridicule Gods people, they did it to John the Baptist,

Cant fix their problems, so they try to mask it,

Not realizing that’s just like sprayin perfume on a casket

Because the problem with religion is that it never gets to the core,

Let’s dress up the outside, make things look nice and neat,

Its funny that’s what they do to mummies, while the corpse rots underneath,

Now I ain’t judging I’m just saying be careful of putting on a fake look,

In every other aspect of life you know that logics unworthy

But see I played this game too; no one seemed to be on to me,

I was acting like church kid, while addicted to pornography.

I’d go to church on Sunday, but on saturday getting faded,

Acting as if I was simply created to have sex and get wasted.

Spend my whole life putting on this façade of neatness,

But now that I know Jesus, I boast in my weakness.

If grace is water, then the church should be an ocean,

Cuz its not a museum for good people, it’s a hospital for the broken

Because my salvation doesn’t depend on me, it depends on him.

because when I was Gods enemy and certainly not a fan,

God looked down on me and said, “I want that man!”

Which is so different from religious people, and why Jesus called em fools

Don’t you see hes so much better than just following some rules?

But my question, is if Jesus were here today, would your church let Him in?

The Son of God not supported self-righteousness, not now, not then.

Now back to the topic, one thing I think is vital to mention,

How Jesus and religion are on opposite spectrums,

One is the work of God one is a man made invention,

One is the cure and one is the infection.

Religion puts you in shackles but Jesus sets you free.

Religion makes you blind, but Jesus lets you see.

This is what makes religion and Jesus two different clans,

Which is why salvation is freely mine, forgiveness is my own,

Not based on my efforts, but Christ’s obedience alone.

Because he took the crown of thorns, and blood that dripped down his face

He took what we all deserved, that’s why we call it grace.

While being murdered he yelled “father forgive them, they know not what they do”,

Because when he was dangling on that cross, he was thinking of you

He paid for all your sin, and then buried it in the tomb,

So know I hate religion, in fact I literally resent it,

Because when Jesus cried It is finished, I believe He meant it.

Question:  So what do you think about the poem?  Leave your comment by clicking here.