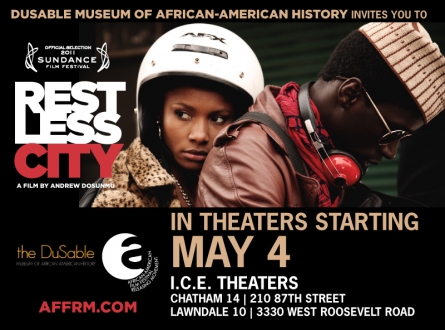 The movie, Restless City, directed by Andrew Dosunmu, is a tale of a male trying to stay live in New York City.  He has a passion for music and he also develops a love interest.

I was disappointed to come across a link for this movie to a place where the entire movie can be viewed right online (which I will not repost or link to).  Surely this decreases interest in going to the theatre to see it, particularly an independent film, when it’s available to watch right online.  Doesn’t seem right. The other movies on the same site that were up had been released for years.  Restless City seemed to be the only movie being featured that had just recently been released to theaters.

Personally, I’m not a fan of the trailer for this movie.  It doesn’t entice me to see it.  However, if it comes to Philly I would see it if nothing else but to support the movement.  And from the written reviews, it’s a great film.  Just not a great trailer.  A trailer should motivate a person to want to see the movie.