YOU ARE FEARFULLY AND WONDERFULLY MADE (PSALM 139:14)

On my way to work, my hubby and I tuned into Jeff Johnson’s commentary on the Tom Joyner Morning Show (107.9 WRNB) (October 19, 2010).  He discusses the importance of building a family legacy and how we can all do this, even if we are not afluent like the Smith family.  I liked it so much, I transcribed the commentary which you can read below.

The country seems to be abuzz with Willow fever.  The youngest of the Smith clan is taking America by storm with her hit single, “Whip My Hair,”  and the video which debuted this week is getting play everwhere from BET’s 106 and Park last night to her scheduled appearance with Ellen in early November.

It seems to be a soon-to-be 10-year-old sensation recently signed to Jay-Z’s Roc Nation label is trying to give her older brother Jaden a run for highest household income for a minor in the Smith house.  Jay’s new third  film, “The Karate Kid” has grossed over 300-million dollars worldwide has her beat so far, but with production credits going to Mom and Dad, Jada preparing for a third season of HawthoRNe, and  Will in production for Men in Black III, it does not seem the unemployment crisis is affecting the home of the Fresh Prince.

But you know, Tom, you can’t experience this kind of success without a few haters.  And many are as always talking.  From the kids being too young to being thrown into this type of celebrity lifestyle, to, “With all the talent in the world, what’s up with all this nepitism?”  Well, let me do this.  Let me drop two issues regarding the Smith haters and then get to the bigger point that I think is paramount for us as a community. 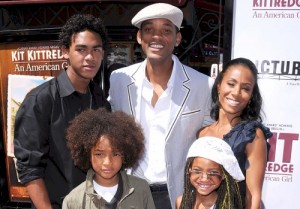 Will Smith is one of the biggest actors in Hollywood and while few label him as the greatest actor of all time, he is the only actor ever to have eight consecutive one-hundred million dollar movies and works harder than most.  Any person, Tom, with that level of appeal and earning power in Hollywood that does NOT put their family on, is not only selfish but foolish.  It kills me that we don’t hear the same kind of cries of nepitism when talking about other celebrity families.

From The Wizard of Oz’s Judy Gardland, mother of Liza Minella to Jane and Henry Fonda.  Or from the Southerlands, Sheens, or the Douglasess.  To Anna Joli and her father John Voyd.  Even the Simon’s clan to a degree.  Nepitism is not new in Hollywood or anywhere for that matter, just ask the Bush’s. The evolution and development of this black celebrity royality in my opinion is a welcome addition to Hollywood.  Not simply because they’re Black but because they’re good and look good doing it.  Jaden just wasn’t the Karate Kid, he made it work.

Now I must admit, I was a little critical when my 11-year-old daughter first started rocking “Whip My Hair.”  And I said, “What is this little girl doing with a song?”  But with age-appropriate lyrics about being yourself and having a good time, a message that should be expressed to kids in other ways as well, how can I be mad?  And the video is really just adorable, with a little black girl rocking multiple natural hairstyles in a cultural environment that seldom promotes national hair at the pop music level.  And as a father of a pre-teen, I’ll take Willow, at last right now, over Nicki Minaj.

But before it seems like I want to be a PR machine for the Smith family, let me go to what I think is the larger issue, and that is family legacy.  So much of our history, not just as people of color, but as humans, has been about creating opportunity for the next generation, beyond what the previous generation has.  But so many of us in the black community have realized that opportunity does not mean excellence.  There’s a time when the term “twice as good” was a mantra not an anomaly, when children didn’t believe that just showing up was enough, and that they had to work twice as hard to be viewed as average and four times as hard to become sucessful.

In times of economic stress, many of our families do not feel they have anything to build with.  Most of us are struggling to pay the rent or the morgage.  How can we talk about building an empire for our children when all this is going on?  But the issue is that we don’t always have to have things but rather principles and models for our children to receive.  I would submit that the Smith kids along with many others who have shine are becoming sucessful because they’ve been given the legacy of a work ethnic and an integrity above opportunity.  Our children live in a world where opportunity that many of us had to fight for is waiting for them to apply. But as they walk into those jobs, leadership positions, and schools void of character, the willingness to work and the committment to give back, that opportunity will never have the return on investment that was intended.

There’s a story in the 29th Chapter of the Book of Jeremiah, where Jeremiah is called to tell the children of Israel what they’re supposed to do to survive they’re Exile in Babylon. The interesting thing about this text is that even though they’re in Exile, they’re being called to multiply and not decrease, which means as a community we have more to give than we often realize.  What the Smith’s represent, Tom, you’ve done by having Oscar run part of your for-profit and Thomas run the non-profit pieces of your empire, what Earl Graves has done with his son Butch and the Black Enterprise brand.  But every family listening has the capacity to do the same thing.  It may not be to become a celebrity, or a radio or magazine owner, but each of us has the ability to provide our next generation with the tools to achieve their dreams. Let’s look beyond what we don’t have in 2010 and look at what we do. Let’s begin to find ways to talk to our children to find out what their dreams are so that we can substantly support them.  And then let them see us work, let them see us sacrifice, let them see us build, and not just let them see us survive.  Because it’s not about Will Smith and Jada or the Grays, or even Tom.  It’s about knowing that our community has the ability to create young people that will build empires if they just see us doing a little bit of work.

Tom:  Yeah, real good job.  Thank you.  Thank you for the complement, man, and the props.  I appreciate that.

Jeff:   Aw, that’s real, man.  I think many of us appreciate the example.

If you are interested in hearing the audio version of this commentary, here is the link, although I can’t guarantee how long the link will work.

Also, if you haven’t seen Willow’s new music video for her hit single, “Whip My Hair,” here it is:

Willow was recently interviewed by Ryan Sycrest for his radio show (click here to view that interview) and when Ryan asked Willow what the song, “Whip My Hair,” means, this is how she responded:

I’ve heard some say that Willow has absolutely no talent.  But she’s nine-years-old, people.  What were *you* doing at age nine?  Surely not recording a song that made it on the pop charts.  While I’m sure there are exceptions, for the most part her song is the school age rage right now!  And the song does have a good message:  to be ourselves and ignore haters.   Ironically, this is a lesson I had to recently relearn after discovering that a couple of perceived friends of mine were truly haters, asking me to “tone myself down.”   They wanted me to behave and respond how they thought I ought. Like them. Less extreme.  I’m “too much.”  Fortunately others in the same circle have encouraged me not to change, to keep being myself, citing that I add value by striving for excellence and going beyond the call of duty, and that being detail oriented are attributes that should be celebrated and not be hidden to appease others.

Your comments are welcome below!