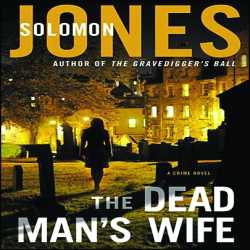 Author is just one of Solomon’s many labels or talents.  I’ve known Solomon over the years as a journalist, columnist, activist, and loving husband and father.

My favorite publication he’s done so far is, “Keeping Up With the Jones,” a compilation of his column by the same name that ran in Philadelphia Weekly.  A collection of humor pieces written about the family.  These days he’s a columnist for WHYY.

But if you love a great story and suspense, you’re a prime candidate to enjoy one of his best-selling novels.   Below is the trailer for his new book, “The Dead Man’s Wife,” and an interview with him about his book.

JUNE:  Hello Solomon, thank you for taking the time to do this interview about your new book!  It’s called,  “THE DEAD MAN’S WIFE,” and it’s available everywhere books are sold.  What made you decide to write about a dead man’s wife?

SOLOMON:  I actually wanted to explore how the legal drug game known as the pharmaceutical industry is similar to the illegal drug game, so I came up with a plot that combined the two. Imagine a top defense lawyer who’s married to a pharmaceutical researcher. Now imagine this woman who seemingly has it all awakening to a living nightmare.

Her husband Paul is dead, she’s covered in his blood, and the police are banging on her door. She doesn’t remember what happened, but she knows how it looks. With just a split second to make a choice, she decides to run, and in doing so, risks everything in an attempt to clear her name. Along the way she discovers the mystery of her husband’s research. But she discovers an even bigger mystery than that. Her husband might not actually be dead.

JUNE:  How do you typically come up with the stories for your books?

SOLOMON:  Sometimes, as with The Gravedigger’s Ball, my wife will give me an idea or a title and I’ll expand it into a story. Sometimes, as I did with The Bridge, I’ll look at things that are actually going on around me and draw inspiration from that. Sometimes, as in Pipe Dream, I’ll take some elements of my own life expereince and weave them into a story. Sometimes I draw characters I’d like to explore, develop relationships between them, and weave the stories out of their interactions. The Dead Man’s Wife came from my desire to write about what happens when the mind is pushed to its limits. I can’t wait to see how readers respond.

How long did it take you to write The Dead Man’s Wife and what was the hardest part about writing this particular book?
The book took about six months to write. I think the hardest part was weaving in elements of the character’s back stories, because this book is driven by action.

How do you juggle writing with the busy schedule of being a husband, father, columnist, political activist and more?
It’s difficult sometimes. When I’m writing a book I often feel like I’m too disconnected from everything else. I’m fortunate to have a good wife who can hold it down while I’m doing what I have to do as a writer.

Did you learn anything from writing your book and what was it?

Yes, I learned a lot about the Food and Drug Administration’s policies and procedures where the development of new drugs are concerned. You can’t just invent a new drug and have it come onto the market. There is a three phase trial period that it has to go through, and at every stage, the FDA is there regulating the process. It can take a decade and a billion dollars to develop a new drug, and a hot drug like Viagra or Lipitor can make over $13 billion a year for the company that owns it. Pharmaceuticals are big business, and for the kind of money that’s involved, murder is not out of the question. That’s where The Dead Man’s Wife comes from.

Your books often read like a movie. They’re very easy to visualize it as a motion picture. Have you given any thought to adapting it into a screenplay?
I wrote several screenplay versions of Pipe Dream and I’ve found that I’m a better novelist than screenwriter. I’ve had books optioned by production companies in the past, so hopefully, the right producer will come along and he’ll bring my money in a wheel barrow.
What books/authors have influenced your writing?
I like a wide range of authors across many different genres. They include Langston Hughes, Stephen King, Dean R. Koontz, Diane McKinney Whetstone and Zora Neale Hurston. I love good storytellers who keep the reader engaged. It doesn’t matter if it’s black activist literature like Hughes, horror like King, poetic prose like Whetstone, or masterful characterization like Hurston. I just love good writing, and I aspire to be as good at my craft as the writers I’ve named.

Will you be having a book release party? If yes, where and when? Can anyone attend?

Yes, there was a book release party at the Prince Music Theater, 1412 Chestnut Street, on Oct. 16th at 5:30 pm. The party also served as the official launch of the Words on the Street literacy program and partial proceeds go to Alzheimer’s research.

How can people get ahold of your book online?  Is it available on the Kindle Fire and Nook?
Yes, it’s available on both Kindle and Nook.

How can others help promote your book?
Online reviews on http://amazon.com/ or http://goodreads.com/ are really helpful. If you like it, tell somebody, tweet about it, say so on Facebook. Spread the word. The bottom line is that the word of another reader goes a long way when it comes to promoting a book.

Do you have plans for any other books?
Yes, I do. My next book will feature Detective Charlie Mann, who’ll go back to where he grew up to discover the truth about his father.
Is there anything else that you would like to add that wasn’t asked?
I’d like to thank you for taking the opportunity to interview me. It was a pleasure and I look forward to chatting on June’s Journal again.

Thank you again for your time!