ABC’s Show Scandal: the Good, the Bad, and the Ugly

I have mixed emotions about ABC’s hit TV show, “Scandal.”   The show, created by Greys Anatomy writer Shonda Rhimes, stars the beautiful and talented Kerry Washington who plays, “Olivia.”  Olivia is a “professional fixer” for big wigs.  She makes their problems go away before the public finds out.  Olivia is also in love with Fitzgerald Grant aka “Fitz,” who is the POTUS (President of the United States), played by Tony Godwyn.  Much of the show revolves around their on and off again emotional & sexual affair.

The Good:  Due Props

On one hand, there’s so much I want to applaud about the show.  It’s written by a  Black woman. It stars a Black woman (in fact, there’s been no Black female leads in a prime-time TV drama series since 1974).  The show is also based on a real life Black woman, Judy Smith, the nation’s top crisis manager who also co-produces the show.  As WCVB put it, “whether it’s Tiger Woods or Michael Vick, Mel Gibson or Monica Lewinsky, former Gov. Eliot Spitzer or even a major corporation such as Enron, when trouble hits they call Judy Smith” (her website is judysmith.com).

From a purely artistic point of view, Scandal brims with talent.  It won an Image Award for “Outstanding Drama Series” in March.  Not to mention winning the NAACP Best Drama Series and other accolades.  The soap opera-like story lines are suspenseful and captivating.  Even Olivia’s clothes are a work of art!  The character’s wardrobe is always super classy and sharp thanks to fashion designer Lyn Paolo.  In many areas, you can summarize the show as simply “brilliant.”

But on the other hand, there’s one specific thing on the show that I see some folk applauding that is, well, unapplaudable.

Twitter and Facebook light up with “Scandal statuses” every Thursday from morning-to-night.  Many of the posters are hopeful that the show’s two lovebirds hookup for good. 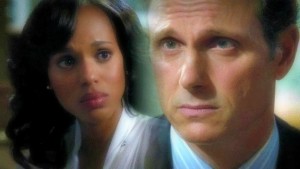 To put it color-boxly, many want Fitz to leave his wife Mellie, the First Lady of the United States, played by Bellamy Young.  They don’t like Mellie and would rather Fitz be with Olivia.

(**Queue the sound effect of car brakes squealing to a halt.**)

You see, I’m connected to a lot of self-professing Christians in my social media circles (Facebook, Twitter, etc).  So their statuses of wanting to see Fitz & Olivia together (#fitzandoliva) baffle me.

Sin is not something people who love God should cheer on, right?  Clearly Olivia & Fitz are in an adulterous relationship.  Right?  So why do so many Christians root for this character to be with her forbidden lover? Fitz is married.  He and Mellie just had a baby, too.    Since when do lovers of God’s Word root for homewreckers?  Isn’t it Christianity 101 that married people ought not to commit adultery?  I mean, it’s one of the Ten Commandments, right?  The seventh to be exact. “Thou must not commit adultery” the Word says.

So even though the show is not real (it’s fiction)…how is it that I saw statuses from a Christian support pro-life issues on Monday… cheer for Oliva & Fitz’s affair on Thursday… then have a problem with the History channel airing The Bible on Saturday?

One friend gave me this answer for all of the above:  double-mindness (James 4:8).

Are you following me or feelin’ me here?

(Side note:  By the way, I personally think The Bible Series on TV did more good than harm.  Even though it wasn’t 100% true to the Bible text, it got people talking about the Bible, tweeting about it, and reading God’s Word.  I’ll share more about this in an upcoming post.)

Some believers even tweet about how cool Olivia’s character is… and they also want to “be” her.  They wish they could be Olivia Pope on the ABC Show, Scandal.  Emphasis on some.  I’m not saying all Christian women want to be Olivia, but some do, as evidenced by their statuses.

Say what?  Yes, it’s true.  Originally I was going to insert screenshots of the statuses I saw on Facebook, but ethnically I won’t since the privacy settings of the statuses were not set to public; they were most likely set to “friends” or “friends of friends” which is how I saw it.

Well, watching or liking a show is one thing.  But wanting to be like one of the characters when the character is known for deceit  is a whole other ball of wax.  Olivia’s character covers people’s sin (aka encouraging deceit), wrecks holy matrimony (again deceit), surrounds herself with professional murderers and helped to rig a presidential election.   Deceit, deceit, deceit.  And, well, deception is one of those things the Lord detests.  Proverbs 6:16 says so:

There are six things the Lord hates—
no, seven things he detests:
haughty eyes, a lying tongue,
hands that kill the innocent,
a heart that plots evil,
feet that race to do wrong,
a false witness who pours out lies,
a person who sows discord in a family.

That scripture just about sums up Oliva Pope, does it not?  Okay, okay, I know some Scandal fans will disagree with me on that one, and I don’t want to exegete the entire scripture here to prove my point.  I’ll just sum it up like this:  Olivia is not a Proverbs 31 woman.  She’s not.  Yet Christian women all over social media want to be her and cheer her on.  This ought not to be!  Right?

Granted, Olivia didn’t really want to go through with rigging the election, but she did.  She also resigned from her position at the White House to stop the affair, but it didn’t stop.  We all make mistakes in our lives.  Big ones and small ones.  It’s just that our Sister Olivia in the span of only a few shows has slept with 3 men:  the President,  the Black gentleman who was pursuing her, and Jake (talk about sleeping with the enemy).  Very unwise.

The Bible is Just as Scandalous

Now please don’t get me wrong.  I’m not hating on the show or suggesting we can’t watch shows that have sin in them, because you’d have to basically not watch any drama series on TV, or even stop reading the Bible for that matter.  Some of the most scandalous stories I know are in the Bible.  Half-brothers raping sisters (2 Samuel 13).  Daughters intoxicating their father and sleeping with him to get pregnant (Genesis 19:31-35).  A father offering his virgin daughters to strangers (Genesis 19:8).  I could go on and on.  The Bible is sizzlin’ with drama and lots of examples of what not to do.  So if I were to tell you not to watch a TV show because it had sin it, I’d have to also tell you not to read the Bible.  Although the Bible is real drama unlike Scandal which stems from Shonda Rimes’ wildest imaginations and her team of writers.

But does this mean we “cheer” for a sin like adultery?  Or that we fantasize about being a character that is the opposite of the Proverbs 31 woman?  I think not!

My bottom line point is this:  Don’t cheer the uncheerable.  Don’t applaud the applaudable.  Don’t get sucked into “Team Scandal” so much that we (unwittingly) glorify adultery.

I propose a challenge to Christian gladiators, if you really want to be radical. Pick a Thursday that you would normally watch the show and read your Bible or pray instead.  If you can’t bring yourself to miss just one show, you might need to evaluate why, spirituality.  This challenge may help with keeping the first of the Ten Commandments: “Thou shall not have any other gods before Me” (Exodus 20:3).

I have watched shows (like Homeland, a drama series on ShowTime), where I sometimes forget that as much as I like the smart FBI agent “Carrie,” I can’t be “thrilled” with her getting together with Brody, a married man who is also an on-again off-again terrorist!  It’s very easy to get caught up in our emotions, excited by these fictitious, dramatic plots and “cheering” for bad guys.  If we are what we eat (as the saying goes), I would dare say there’s potential to become what we (regularly) watch.   Garbage in, garbage out.  This is why it’s critical as Christians to renew our minds daily (Romans 12).

So what do you think about any or all of the above?  Please leave your comments below.