Ronald McDonald is Not Your Friend! – June's Journal Skip to content

Ronald McDonald is Not Your Friend! 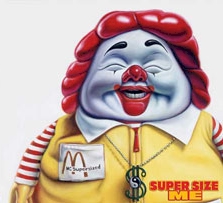 According to one of my I-know-everything-before-you-do girlfriends, I’m behind the times for not having seen the Oscar-nominated documentary, “Supersize Me” before this month.  “Where have you beeen?” she asked.  Well, to be flat out honest, I’ve been at McDonald’s more than I care to disclose!  At least once or twice a month when my hubby & I would be in a hurry and low on cash, the drive-through window at our friendly Golden Arches and the Dollar Menu were the perfect solution… or so it seemed.

I decided to blog about this documentary because even though my girlfriend was well informed about it, I’ve run into many other friends & family members who are were, who never even heard of this film, even though it was nominated for an Oscar this year!  (And the film actually won awards for screenwriting, see the official supersizeme.com website for more info.)  You can rent the DVD/video at your local Blockbuster or buy it online.

I recommend everyone to watch this documentary.

The main storyline of Supersize Me is about a man who decided to eat nothing but McDonald’s for 30-days.  Before doing this he goes to a few different doctors who specialize in different areas.  They gave him a very detailed physical examine, checked his blood and his chlesterol level, his weight, heart, and so forth.  He was pretty fit.

So we watch in alarm as the man begins to deteriate in health almost right away, to the surprise of one of the doctors who predicted that he’d be just fine but maybe gain a little weight.

Meanwhile, while this experient is going on, many other interviews and information is relayed to the viewer.  For example, the chicken McNuggets come disfigured chickens, and the newer “all white breast meat” nuggest come from chicken with over-sized breasts!  It’s pretty wild the things you learn through the documentary.  For example, one hamburger can be a combination of literally a thousand different cows & cow feces, due to the way they process the food.  The conditions of the cows are horrific… they graze in overcrowded areas, so they are on top of one another almost and eating each other’s bowl movements and stuff. Nasty!  And these are the cows used in their food. And this is all done to save money (i.e., not put them in better grazing areas).

There was one test done in the film, where a hamburger from McDonalds was put in a glass jar, some McDonald’s fries was put in a glass jar, and a “real” hamburger from a local hamburger joint was put in a jar.  The real hamburger deteriated right away in a few weeks, showing mold and what not, which is NORMAL.  But the McDonalds hamburger (actually it might have been a cheeseburger, and they had either a McChicken or McFish in the test too), well, those ones did NOT mold or decay after a week’s time.  It was a few WEEKS before their hamburgers began to grow mold, and the french fries, well… no mold was present after several weeks.  The point of the test is… what is that food doing in our stomach!  If the fries don’t break down like NORMAL food SHOULD?

They also took us into the public schools and showed us the unhealthy foods being served to kids on a daily basis and the cuts taking place in physical fitness & health education in schools today and the growing problem with obesity in our nation.  We even watch as the main character attemps to contact McDonald’s headquarters for an interview.  It’s pretty fascinating.  Trust me, you won’t run out to Mickey D’s after watching this film.

And really, taking care of our health is easier than we make it sometimes… more on that later!