Black Lives Matter Equally. That is the Point. 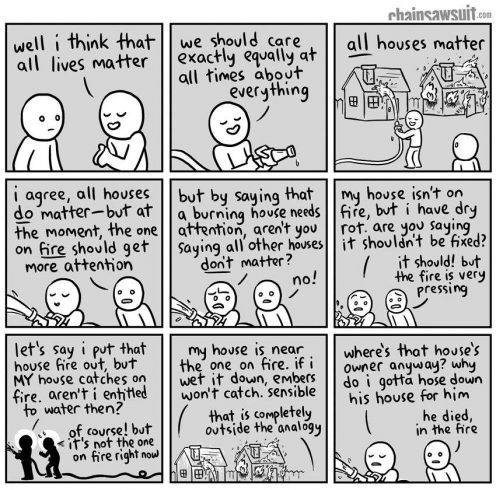 I came across the below cartoon on Facebook and wanted to add it here to my blog.  It does a great job of illustrating the what the slogan “Black Lives Matter” (#blacklifematters) means.

Of course all lives matter. That is a given.

So then what does the slogan mean?

A  Comic Strip Worth a Thousand Words

Here is a comic that hits the nail on the head, for me anyway.  It was authored in December 2014 by Kris Straub of chainsawsuit.com; you can view the cartoon here on his site. 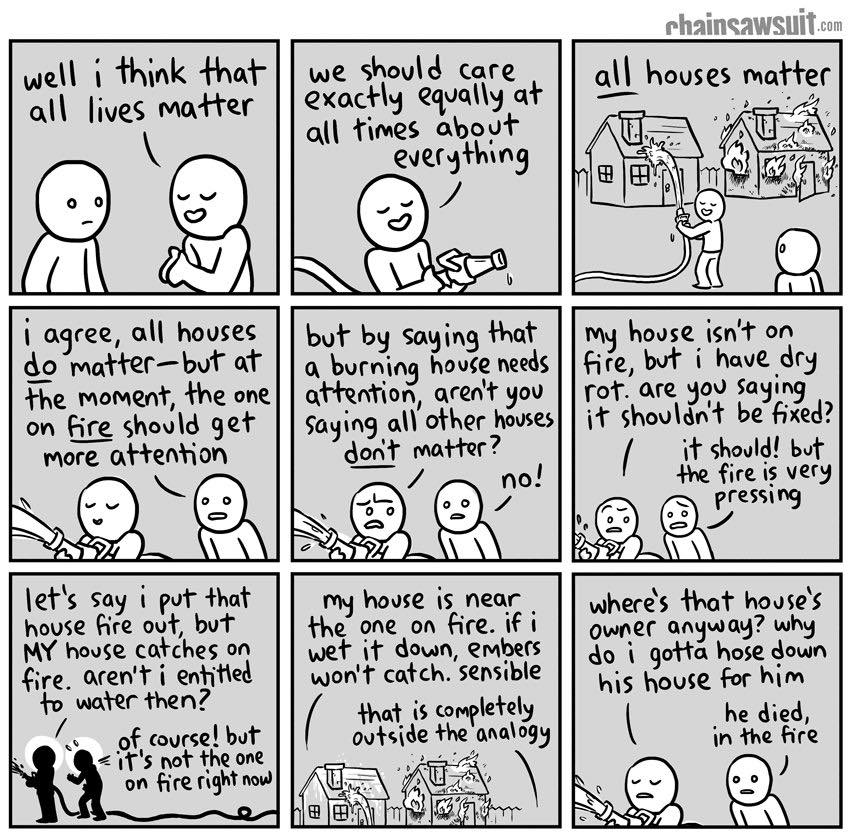 The point is that Black lives should matter equally.

“But, June” you might say, “Black Lives do matter equally.”

This movement has been busy with case after case of unarmed Black men being shot, sometimes at seemingly routing traffic stops.  Not every case is blameless, meaning some of those do involve suspects who were armed, but so many involve unarmed Black men.

The latter seems to be on the rise.  Either the number of cases are more or our awareness is simply increased thanks to smart phones, police car videos, and body cams capturing so many of these cases on fim.

That said, do I agree with everything the Black Lives Matter says or does?

No, I do not.  I typically do not agree 100% with any movement, pastor, president, celebrity, or political party.

However, I’m open minded enough to listen to all sides and chew the meat & spit the bones.  And after having done so reviewing many of the cases brought to our attention through the Black Lives Matter movement, I believe there is a validity, need, and purpose for this organization.

At minimum, there is a need for the awareness and spotlight on a problem that is not getting better, whether that vehicle be the Black Lives Matter movement and/or other movements or organizations.

It’s a shame that such an organization or movement has to even exist, but that is simply our reality in the world today: there is good, bad and ugly.

The reality that “Black Lives Matter” is so misunderstood across America highlights how many people of color are often misunderstood by other Americans.  When others retort, “All lives matter,” it begs to wonder if those individuals understand what their heart (or perhaps in this case their brain) is revealing.

Another Illustration to Drive Home the Point

It’s sort of like running up on stage during a presentation for Breast Cancer Awareness month and saying:

“Wait!  Stop this nonsense about educating people about Breast Cancer!  Just stop it.  Because **ALL** cancer matters.  Not just **BREAST** cancer. Why all the emphasis on a particular type of cancer?”

Yes, all cancer matters. But during Breast Cancer Awareness month, focus is given attention to a cancer that historically has killed masses of women across America, and even some males.

A Word about Blue Lives

Being Blue is a CHOICE; being Black is not a choice a person can make.

We have freedom of speech and people are free to make OTHER points of course, so if someone wants to state the obvious that all lives and blue lives matter, they can.  I just hope they don’t miss the bigger point while doing so.

For the record, I have great respect for our men and women in uniform: military and law enforcement.  I’m an Army brat, and my brother-n-law served as a military policy officer for years. I also knew persons at my home church who served their communities as correction officers.  My mom also worked quite a few jobs as a security guard.  Not quite the same thing, but in the same realm.

This should go without saying, but just so my words or stance does not get twisted or misunderstood, I do not endorse any of the killings of our nation’s police officers.  Unfortunately, there are a lot of mentally disturbed people in our society, another “problem” that deserves the spotlight for sure.

As the above cartoon depicts, all houses (read: lives) matter, and the ones on fire are the ones that require our most urgent attention to in that moment of time, WHILE it is on fire, BEFORE it incinerates.

Friends, too many Black lives in America, the land of the free, are on fire.